This video is interesting, too:

This video from Hoover’s election campaign is important, too:

If we objectively compare Hoover’s failure with Roosevelt’s success, the biggest difference we find between the failure and success in dealing with great depression is, what did was usually too little too late. Not all, but, many of the reforms that Roosevelt did to combat great depression were initiated by Hoover. Roosevelt just did those reforms on a much larger scale. Contrary to Hoover, Roosevelt was lot more aggressive, timely and his measures matched the scale of disaster. The biggest lesson that we get by comparing Hoover and Roosevelt is that doing the right thing is not enough. It needs to be done on a scale required by crisis.
Please, refer to the Wikipedia article, Herbert Hoover. It states:
“Herbert Clark Hoover (August 10, 1874 – October 20, 1964) was the 31st President of the United States (1929–1933).”

“Hoover, a trained engineer, deeply believed in the Efficiency Movement, which held that the government and the economy were riddled with inefficiency and waste, and could be improved by experts who could identify the problems and solve them.”

“Hoover went to Australia in 1897 as an employee of Bewick, Moreing & Co., a London-based mining company.” 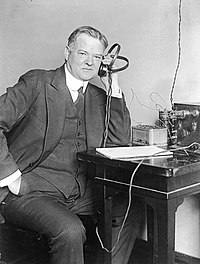 “Hoover married his Stanford sweetheart, Lou Henry, in 1899.”
“Hoover was made a partner in Bewick, Moreing & Co. in 1901 and assumed responsibility for various Australian operations.”
“In 1908, he became an independent mining consultant, traveling worldwide until the outbreak of World War I in 1914.”
“When World War I began in August 1914, Hoover helped organize the return of 120,000 Americans from Europe: tourists, students, executives, etc.”
“For the next two years, Hoover worked 14-hour days from London, administering the distribution of over two and one-half million tons of food to nine million war victims.”
“After the United States entered the war in April 1917, President Woodrow Wilson appointed Hoover head of the U.S. Food Administration.”
“After the war, as a member of the Supreme Economic Council and head of the American Relief Administration, Hoover organized shipments of food for millions of starving people in Central Europe”
“Hoover provided aid to the defeated German nation after the war, as well as relief to famine-stricken Bolshevik-controlled areas of Russia in 1921, despite the opposition of Senator Henry Cabot Lodge and other Republicans.”
“Hoover confronted a world of political possibilities when he returned home in 1919.”
“Hoover realized that he was in a unique position to collect information about the Great War and its aftermath.”
“Hoover rejected Democratic overtures in 1920.”
“He placed his name on the ballot in the California state primary, where he came close to beating popular Senator Hiram Johnson.”
“After being elected, Harding rewarded Hoover for his support, offering to appoint him either Secretary of the Interior or Secretary of Commerce.”
“Hoover aimed to change that, envisioning the Commerce Department as the hub of the nation’s growth and stability.”
“As secretary and later as President, Hoover revolutionized the relations between business and government.”
“Many of Hoover’s efforts as Commerce Secretary centered on the elimination of waste and the increase of efficiency in business and industry.”
“His “Own Your Own Home” campaign was a collaboration to promote ownership of single-family dwellings, with groups such as the Better Houses in America movement, the Architects’ Small House Service Bureau, and the Home Modernizing Bureau.”
“It has been suggested that Herbert Hoover was the best Secretary of Commerce in United States history.[18][19]”
“Hoover’s radio conferences played a key role in the early organization, development and regulation of radio broadcasting.”
“Hoover also played a key role in major projects for navigation, irrigation of dry lands, electrical power, and flood control.”
“Although he continued to consider Harding ill-suited to be President, the two men nevertheless became friends.”
“By the end of Hoover’s service as Secretary, he had raised the status of the Department of Commerce.”
“As Commerce Secretary, Hoover also hosted two national conferences on street traffic, in 1924 and 1926 (a third convened in 1930, during Hoover’s presidency).”
“The Great Mississippi Flood of 1927 broke the banks and levees of the lower Mississippi River in early 1927, resulting in flooding of millions of acres and leaving one and a half million people displaced from their homes.”
“With a grant from the Rockefeller Foundation, Hoover set up health units to work in the flooded regions for a year.”
“The treatment of African Americans during the disaster endangered Hoover’s reputation as a humanitarian.”
“To gain Republican votes in Southern states, Hoover pioneered an electoral tactic later known as the “Southern Strategy”.”
“When Calvin Coolidge declined to run for a second full term of office in 1927, Herbert Hoover became the leading Republican candidate for the 1928 election, despite the fact Coolidge was lukewarm on Hoover, often deriding his ambitious and popular Commerce Secretary as “Wonder Boy”.[25]”
“Hoover campaigned for efficiency and prosperity against Democratic candidate Alfred E. Smith.”
“Historians agree that Hoover’s national reputation and the booming economy, combined with deep splits in the Democratic Party over religion and Prohibition, guaranteed his landslide victory with 58% of the vote.”
“Unlike many previous first ladies, when Hoover’s wife, Lou Henry Hoover, came to the White House, she had already carved out a reputation of her own, having graduated from Stanford as the only woman in her class with a degree in geology.”
“Hoover’s stance on the economy was based largely on voluntarism.[39]”
“Calls for greater government assistance increased as the U.S. economy continued to decline.”
“In 1931, Hoover issued the Hoover Moratorium, calling for a one-year halt in reparation payments by Germany to France and in the payment of Allied war debts to the United States.”
“By 1932, the Great Depression had spread across the globe.”
“Prior to the start of the Great Depression, Hoover’s first Treasury Secretary, Andrew Mellon, proposed and saw enacted, numerous tax cuts, which cut the top income tax rate from 73% to 24% (under Presidents Warren G. Harding and Calvin Coolidge).”