There is hardly ever a good news from G8 summits. This year’s theme that is being trumpeted by, so called, world leaders and corporate media, is, outrageously, and supposedly, world is in trouble, because, big governments could not collect enough taxes, due to the existence of what they label as ‘tax havens’. If you are wondering, or confused, what tax havens actually are, just to let you know, these are the country which have low taxes and small governments that continue to record, contrary to high tax and big government countries, high growth rates and rising standards of living.

Not to my surprise, at least, these so called world leaders, instead of following the footsteps of successful leaders, are trying to make these countries, increase the taxes, so that the creative, innovative, profitable, job creating, high growth, lucrative businesses do not continue to run away from them to the more business friendly, libertarian and real capitalist economies. How pity! And the f*cking media keep giving us the impression that they are there to solve our problems.

This is just another proof of the fact that government is not solution, it is the problem. This chart was printed in Washington Times and clearly shows the tyranny of big governments and high taxes: 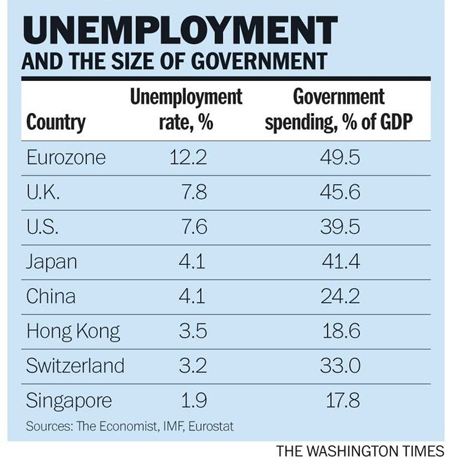 This chart proves that government spending has an inverse relationship with unemployment, justifying the old notion that government spending diverts the precious and scarce resources from high value investments, and kills the growth and jobs. In the times when per capita income in Hong Kong is catching us and it has already way surpassed us in Singapore, how these idiots even dare to propose that they are right and high growth and high employment countries have to follow their guidelines?

This is because this is not the way, their partners in big media put it. They use highly deceptive terms and phrases like tax fairness and income equality, and we always fall for those.

To fully understand this problem, first, we have to set the goals for a successful and prosperous economy. Is the goal of a successful economy to stretch and compress everyone equal, one way or the other, or it is, to achieve high growth rates, broader investments, more jobs, higher incomes, improved standards of living and better affordability. Communists and socialists tried the former goal and they failed, completely and miserably. So, if the later goal is desirable one then these so called world leaders have absolutely no right to pull back the successful economies.
The corruption level in these big governments is so high that it seems to be too optimistic even to expect any improvement on their part. They are under complete control of and are being totally run by corporate lobbies. Especially in American culture, with over two billion dollar presidential campaigns in 2012, money and politics are now synonymous. It is virtually impossible to even imagine of running elections without the sponsorship of corporate lobbies.
The two party duopoly has virtually ruined the whole system. Since Abraham Lincoln, the two, so called major parties, have fully dedicated themselves to build, maintain and strengthen their complete control over the political system. Their campaigns are financed by same corporations that own big media. So, they make sure that no third party candidate gets enough leverage through media to come into lime light.
Their state governments have made the laws to make it incredibly difficult for third party candidates to even get on the ballots. They have built every possible obstacle in the way of third party candidates to get slightest eligibility for public financing. They are not invited by so called presidential commission to the nationally televised debates.
Then the mainstream media keeps feeding the voters that it is totally hopeless to even think about voting for a third party candidate. They use scare tactics like the race is too close to call and if you vote for a third party candidate, it will actually favor the liberal or conservative candidate, whoever you don’t like. So, we are basically told that in this world’s oldest and flag bearer democracy, we have no choice except to either to vote for greater evil or lesser evil. How ridiculous is that? I mean, we criticize whole bunch of other countries for monopolistic democracies. Our point is that when people do not have real choices, it is not really a democracy. What about our own Democracy, then? Where we have to choose between the parties that are being run by same rich, powerful and influential corporations and lobbies?
Question is, how do we get out of this mess? How do we break this perpetual cycle of being run by special interest? How do we restore the real government of the people, by the people and for the people, as originally intended by our constitution and forefathers? The constitution which starts with the phrase, “We the people”, not, “We the corporations”, or, “We the rich”, or, “We the powerful”, or, “We the influential”, or, “We the elite, or, “We the famous”.
Trust me, like any other change, including the declaration of independence, this change will start with me, not you, not them, not others, not someone, and not even us. It will start with freeing myself from the slavery of big media and corporations. When every one of us will decide that for the sake of my loving country, this great nation and my future generations, regardless of anything and anyone, first of all, I am freeing myself from the influence of big media.
I will not let big media chose winners and losers for me, in the very next elections. I will not abstain from voting for the best candidate, just because he or she is not on TV, or does not have fanciful campaign, or because of lake of corporate money, or due to slimmer chances of winning. As an American it is my duty to identify the most eligible candidates through best and most reliable sources, help them succeed in every possible manner, and vote for them regardless of anything.


Conquer the web with ExcitingAds!